What is Near Protocol?

Near is a scalable blockchain designed to provide the performance and user experience necessary to bridge the gap to mainstream adoption of decentralized applications. Unlike other next-generation blockchains, the NEAR network has been built from the ground up to be the easiest in the world for both developers and their end-users while still providing the scalability necessary to serve those users. Near uses Proof-of-Stake (PoS) consensus mechanism and will eventually feature a sharded architecture to scale transaction throughput. Its block generation scheme is called Doomslug and its proposed sharding design is dubbed Nightshade. These technologies will work together to scale the network and minimize congestion. NEAR has also been designed to be developer and user-friendly as it features a few key innovations to accelerate the application development and user-onboarding processes. The NEAR blockchain was created and developed by the NEAR Foundation. Its main net went live in April 2020, and network validators voted to unlock token transfers in October 2020. NEAR’s bridge to Ethereum (called the Rainbow Bridge) launched in March 2021.

Who is the team? Is the team doxxed? Link to the team page if available.
The Near Team is doxxed and the entire team can be found here on [LinkedIn]Sign Up | LinkedIn.

When did the project launch?
The genesis block for near was July 21st, 2020. Charts+Stats

What is the token distribution chart?
For the native Near Token: Token/Supply.

Wallet addresses of top 10 holders?
Holders. Top 10 own 92% of the token supply.

Link the most recent audits of the project.

Is the code open source?
Yes. Link to GitHub is in Social channels.

What is the relevant token?
Bridged Near from Allbridge. Source chain being Near blockchain.

How is the collateral token minted? Is there a minting process?
Native Near tokens are distributed through the Proof of Stake consensus method on the Near blockchain.

How is the collateral token used in its native ecosystem?
The Near token is used as both a security layer through staking, gas on the near blockchain, and native defi throughout the Near ecosystem

Where can the asset be exchanged on Solana?
Aldrin

% Comparison to BTC and ETH 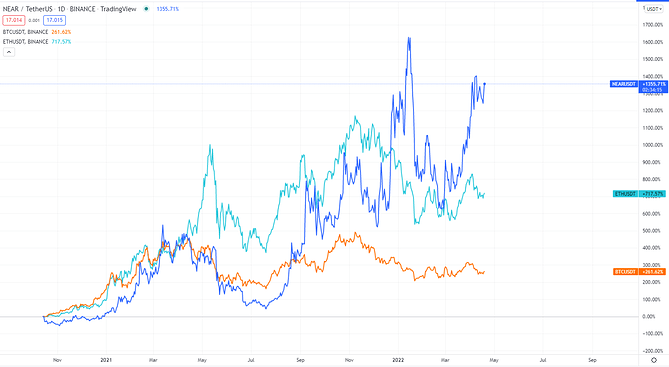 What are the potential risks of adding this token as collateral?
Liquidity. There is only $400k of liquidity sponsoring the bridged near token, which is also being sponsored by one singular address: Solscan. Not only can this address pull all liquidity but liquidity is extremely thin. The trading pair is also created against mSOL. Thus creating a high probability of impairment loss for even other willing LP providers.

Solutions:
Apply for Near Grant and create NEAR-USDH liquidity. To then allow for bridged Near for collateral on Hubble.

I think you’re spot on with the liquidity assessment at the end. How much is enough liquidity?

With wrapped assets that receive oracle price feeds, we would need about 2 million in liquidity if not more. Why?
As soon as people find out Hubble made near collateral, it wouldn’t surprise me if individuals immediately rush to buy it and collateralize it on the platform thus draining and unevening the LP pool, thus if a whale started to manuplate the pool, users on the Hubble have a high change of getting liquidated because of market manipulation done by the whale. This is also why the Hubble token is not collateral yet, not enough liquidity and thus the token is subject to price manipulation.